Three College of Arts and Humanities students, Sabrina Jérôme, Christopher Clemente, and Lauren Gandy, will be inducted into the Class of 2017 Order of Pegasus—the university’s highest and most prestigious award—honoring outstanding student performance “in the areas of academic achievement, outstanding university involvement, leadership, and community service.” Sabrina Jérôme is double majoring in Religion and Cultural Studies and Political Science, and hopes to use her UCF experiences to attend law school and become an immigration attorney; later, she aspires to practice diplomacy as an ambassador of the United States. Sabrina is a member of the President’s Leadership Council, in addition to serving as a Justice in the Judicial Branch of the Student Government Association.

“UCF has provided [me] with a plethora of learning experiences through service and leadership opportunities,” she says.

Sabrina’s biggest challenge at UCF has been “trying to accomplish so much with a modest economic status,” but to overcome it, she “found strength in her family and love for her fields of study.”

Dr. Ann Gleig, Assistant Professor of Religious Studies, will attend the Order of Pegasus ceremony with Sabrina. Dr. Gleig has worked with Sabrina on an honors in the major project on colonialism and Creole societies.

Sabrina’s “commitment to interdisciplinary thought and research can … be seen in the fact that after completing her Religion and Cultural Studies major, Sabrina has continued to expand her intellectual horizons by taking on a double major in Political Science—International Affairs,” says Gleig.

When asked what advice she would give to other UCF students, Sabrina’s message is, “continue to strive to be the best version of yourself and never allow yourself to be discouraged!” 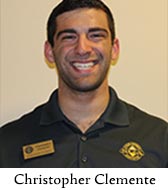 Christopher Clemente is doubling majoring in Political Science and History, with a minor in Philosophy. Upon graduating, Christopher plans to attend law school and move on later to teach History. He has served on the President’s Leadership Council and is the Student Government Association Student Body President.

“Even though I was raised in Tampa—Bull territory—I have always considered myself a Knight. During my time at UCF, I have dedicated my time to the College of Arts and Humanities and College of Sciences,” says Chris, “To continue my studies, I plan on attending law school to provide a voice for the voiceless and empower the powerless.”

Chris’ biggest challenge at UCF has been “been balancing [his] academics with extra curriculars,” but from this he has “learned that [he has] been and always will be a student first.”

When asked what advice he would give to other UCF students, Chris simply says, “never settle.” Lauren Gandy is double-majoring in Biochemistry and French, with a minor in Chemistry. Upon graduation, Lauren plans to attend a doctoral program in chemistry and would like to work for the Department of Defense in the chemical defense sector. She is the Sibille H. Pritchard Global Peace and Securities Fellow for the Global Perspectives Office, and has had internships with both the National Center for Forensic Science and the Defense Forensic Science Center.

“The Order of Pegasus award is a singular honor, and I am truly humbled to receive it,” says Lauren. “The most valuable experiences [I’ve had at UCF] are from the mentorship of three professors: Dr. Candice Bridge, Dr. Charlotte Trinquet, and Dr. Stephen Kuebler.” Lauren says the encouragement and research opportunities that she has received from her mentors has guided has to academic success and a clear vision of the future she strives for.

“The message I would like to give to future students is to seek challenges,” Lauren says, “facing challenges head-on allows you to widen your support network and expand your problem-solving arsenal.”


Appears on Modern Languages and Literatures